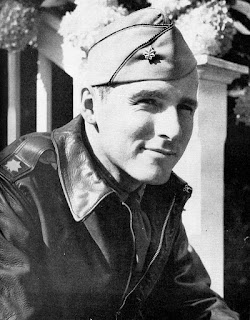 William Edwin "Ed" Dyess
"The 21st Pursuit Squadron was assigned to the 24th Pursuit Group which together with the 19th Bomb Group suffered heavy casualties during the opening of the war with Japan in 1941.  Flying P-40 Warhawks against superior Japanese types, Dyess maintained his unit's morale in the face of staggering losses during the Battle of Bataan.  When his squadron ran short of aircraft, Dyess transitioned to an infantry officer, serving in this capacity during the Battle of the Points.  When the Bataan Peninsula fell to the Japanese, Dyess, as commanding officer, refused to abandon those of his squadron who could not be evacuated. He gave his airplane ("Kibosh") to another fighter pilot, Lieutenant I.B. "Jack" Donaldson, for last bombing run on April 9, after which Jack was ordered to fly it to Cebu, where he crash landed.  Dyess also supervised the evacuation of Philippine Army Colonel Carlos Romulo, a close friend of General Douglas MacArthur, who would survive the war and would later serve as President of the United Nations General Assembly.  Dyess was captured by the Japanese on April 9, 1942, north of Mariveles, Bataan, and the next morning, he and the others who surrendered at Bataan began the infamous Bataan Death March.  He was imprisoned at Camp O'Donnell and then, from June to 26 October 1942, at Cabanatuan.  There, his men and he were routinely denied the rights of prisoners of war.  Dyess and others were transported by ship, the Erie Maru, to the Davao Penal Colony on Mindanao, arriving November 7.  After two months of planning and preparation, Dyess, along with 9 other American POWs, including Major Jack Hawkins, Austin Shofner, and Samuel Grashio, and two Filipino convicts escaped from Davao on April 4, 1943.  It was the only large-scale escape of Allied POWs from the Japanese in the Pacific Theater during World War II.  Dyess and his group spent several weeks evading pursuit, then joined a group of guerrillas for several months.  The group decided to split up, with seven joining organized guerrilla forces in northern Mindanao.  Dyess and two others were evacuated by the U.S. Navy submarine Trout to Australia in July 1943.  Upon reaching the United States in August, he was thoroughly debriefed on his experiences as a POW by high-ranking military brass.  He was ordered to recuperate, in September 1943, at the Ashford General Hospital in White Sulphur Springs, West Virginia.  From his hospital bed, Dyess worked with Chicago Tribune writer Charles Leavelle to tell the story of the atrocities and brutality his fellow POWs and he had experienced and witnessed while in Japanese captivity.  The U.S. government, however, refused to release Dyess' story for publication on the grounds that it would infuriate the Japanese and risk the death of remaining American prisoners.  The Tribune had to wait another four and a half months for the Secretary of War to grant release of the story."
Was awarded the Texas Medal of Honor in 2015.
May you be at peace,
Brian
Posted by Weird WWII at 6:35 AM