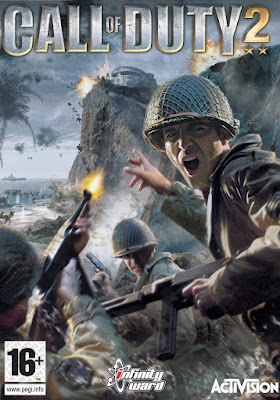 "Call of Duty 2 is a 2005 first-person shooter video game developed by Infinity Ward and published by Activision in most regions of the world.  It is the second installment of the Call of Duty series. Announced by Activision on April 7, 2005, the game was released on October 25, 2005 for Microsoft Windows, and on November 22, 2005 as a launch title for the Xbox 360.  Other versions were eventually released for OS X, mobile phones, and Pocket PCs. The game is set during World War II and the campaign mode is experienced through the perspectives of four soldiers: one in the Red Army, one in the United States Army, and two in the British Army.  It contains four individual campaigns, split into three stories, with a total of 27 missions. "  "Big Red One differs from other games in the Call of Duty franchise in that it focuses on a single Allied formation in World War II: the U.S. Army's 1st Infantry Division, which goes by the nickname Big Red One due to their unit patch which features a large, red number one.  The game covers the division's part in the North Africa Campaign, the invasion of Sicily, the landing on Omaha Beach in Europe and moving east, and eventually crossing the Siegfried Line into Germany.  Each chapter is book-ended with period footage from the Military Channel, with voiceovers courtesy of Mark Hamill, imitating a World War II documentary."  Check out the trailer below and remember the battles from your youth.
Call of Duty 2 trailer
&
Call of Duty 2: Big Red One trailer
Great games,
Brian
Posted by Weird WWII at 4:56 AM