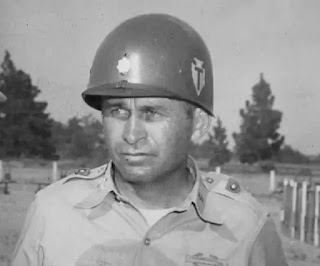 M. B. Etheredge
"On the night of March 12 13, 1944, Col. Etheredge was assistant commander of a combat patrol when it came under heavy machine gun fire north of Carano, Italy; disregarding the bullets flying all about him, he personally led his squad in a successful assault on the machine gun; when a second machine gun erupted, he again braved the barrage as he directed his men in laying down fire, allowing the main part of the patrol to advance against the gun and silence it.  Farther along, a third strong point opened heavy fire; once more, Col. Etheredge moved about aggressively in the midst of this attack, developing a strong firing line and enabling the main body of the patrol to skirt the house and continue on its mission; altogether, the patrol killed at least 10 Germans, captured 12, and knocked out two machine guns, and Col. Etheredge's remarkable gallantry and leadership in this operation earned for him a Silver Star.  Two months later, on May 23, 1944, in Italy, Col. Etheredge immediately took charge of Company "K," 30th Infantry Regiment, when the commanding officer and other key personnel were cut down; deciding to continue the attack, he ignored heavy fire to move up and down a ditch for 75 yards, reorganizing his company and bolstering its morale; though wounded in the leg, he then led his men running and crawling into the face of steady small arms fire for some 550 yards, rested them for 10 minutes, and then resumed the assault, advancing another 250 yards, overrunning the objective and organizing an all‑around defensive position.  Col. Etheredge's actions were instrumental in securing a vital battalion target, relieving pressure on two flank companies, and opening a way for a third company to advance; his critical role in this day's action was rewarded with the appendage of an oak leaf cluster to his Silver Star.  Col. Etheredge subsequently commanded Company "K" in France; there, on August 16, 1944, he once again exposed himself to gunfire in the course of significantly assisting the American advance; he was sitting atop a tank destroyer, directing its fire at German‑held buildings 200 yards distant, when he barely escaped a machine‑gun fusillade; a platoon flanking the building then fell into disarray and Col. Etheredge dashed across 75 yards of open ground through more machine‑gun fire to reorganize the group; choosing a route that skirted the barbed wire outside the buildings, he next led a 50‑yard assault that captured 29 enemy soldiers, an anti‑tank gun, a mortar, large quantities of ammunition, and numerous vehicles; in recognition of his bravery and decisive command, he received a second oak leaf cluster.  During the war Col. Etheredge also received two Bronze Stars and two Purple Hearts; he was eventually discharged with the highest efficiency rating of any officer discharged from the Fourth Army; this dauntless soldier later served three terms in the Texas Legislature and taught for 33 years at Sam Houston State University."  from House Concurrent Resolution No 27 in June 2003.
May you be at peace,
Brian
Posted by Weird WWII at 5:19 PM