"The Golden Nazi Vampire of Absam: Part II - The Secret of Kottlitz Castle" 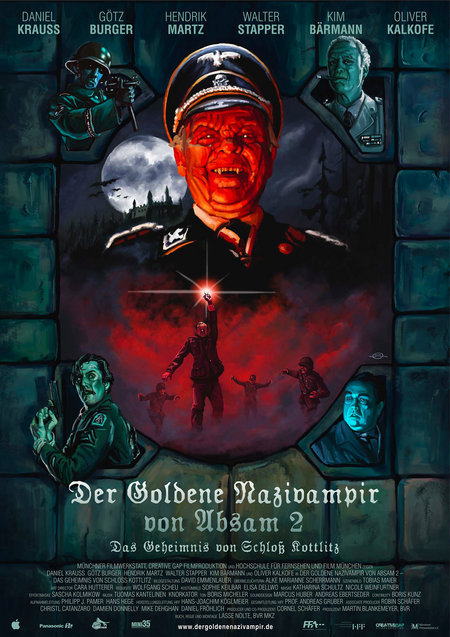 "If things were up to General Donovan, then the Military Secret Service of the United States would take care of really important things, of which there are plenty in this Autumn of 1942.  Let the Waffen-SS search for Atlantis and dance around Germanic Druid Stones - who believes in the occult of "Wunderwaffen" or "miracle weapons" anyway?  At least no straightforward American patriot, only pathetic wimps like William Blazkowicz, the only person at the OSS who wears glasses.  But then ... can you dare risk to ignore explicit warnings?  Secretly shot films?  Evidence?  What is really happening in Kottlitz Castle?  Who killed Smokey Savallas?  What kind of research is the "Ahnenerbe der SS" involved in?   Who stole Count Dracula's bones from a crypt in Wallachia?  And where's the connection between a fanatic SS General, underground laboratories full of German scientists, and a huge pit filled with molten gold?   Questions, questions ... and of all people William Blazkowicz is being smuggled into the Austrian Alps to find answers.  But no one could ever imagine in the wildest of dreams what Blazkowicz is going to unearth at Kottlitz Castle ..."  Now I can't seem to find this flick and all I can seem to find is the trailer so take a look at that trailer and see that you think.