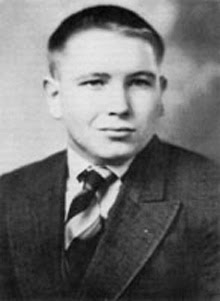 "For conspicuous gallantry and intrepidity in action above and beyond the call of duty.  On 24 December 1942, near Buna, New Guinea, Sgt. Gruennert was second in command of a platoon with a mission to drive through the enemy lines to the beach 600 yards ahead.  Within 150 yards of the objective, the platoon encountered 2 hostile pillboxes.  Sgt. Gruennert advanced alone on the first and put it out of action with hand grenades and rifle fire, killing 3 of the enemy.  Seriously wounded in the shoulder, he bandaged his wound under cover of the pillbox, refusing to withdraw to the aid station and leave his men.  He then, with undiminished daring, and under extremely heavy fire, attacked the second pillbox.  As he neared it he threw grenades which forced the enemy out where they were easy targets for his platoon.  Before the leading elements of his platoon could reach him he was shot by enemy snipers.  His inspiring valor cleared the way for his platoon which was the first to attain the beach in this successful effort to split the enemy position."

From Sgt. Gruennert's Medal of Honor citation, awarded on October 11, 1943.

May you be at peace,
Brian
Posted by Weird WWII at 9:16 AM