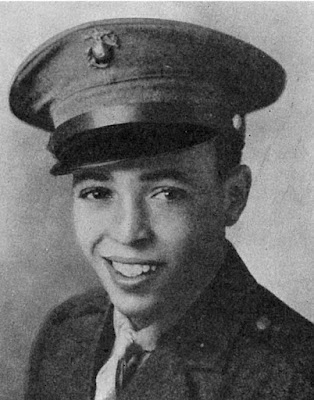 "For conspicuous gallantry and intrepidity at the risk of his life above and beyond the call of duty as acting scout sergeant of a forward observer team, serving with Battery L, Fourth Battalion, Fifteenth Marines, Sixth Marine Division, during action against enemy Japanese forces in Okinawa Shima in the Ryūkyū Chain, 15 April 1945.  Undaunted by the powerfully organized opposition encountered on Motobu Peninsula during a fierce assault waged by a Marine infantry battalion against a Japanese strong-hold, Private First Class Gonsalves repeatedly braved the terrific hostile bombardment to aid his forward observation team in directing well-placed artillery fire and, when his commanding officer determined to move into the front lines in order to register a more effective bombardment in the enemy's defensive position, unhesitatingly advanced uphill with the officer and another Marine despite a slashing barrage of enemy mortar and rifle fire.  As they reached the front, a Japanese grenade fell close within the group.  Instantly Private First Class Gonsalves dived on the deadly missile, absorbing the exploding charge in his own body and thereby protecting the others from serious and perhaps fatal wounds.  Stouthearted and indomitable, Private First Class Gonsalves readily yielded his own chances of survival that his fellow Marines might carry on the relentless battle against the fanatic Japanese and his cool decision, prompt action and valiant spirit of self-sacrifice in the face of certain death reflect the highest credit upon himself and the United States Naval Service.  He gallantly gave his life in the service of his country. "

Thank you for your sacrifice and may you be at peace,
Brian
Posted by Weird WWII at 2:47 PM