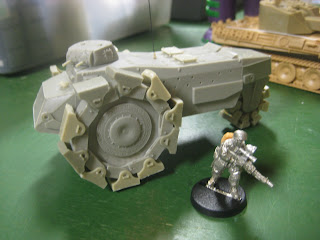 What we have here is the real prototype German Minenraumer in 1/48 scale by Gaso.Line.  This vehicle was designed to make paths through minefields by safely detonating them as the vehicle drove over them.  The vehicle was also provided with a PzKpfw I turret with two machine guns used to suppress enemy infantry or AT gun crews as it moved through the minefield.  In the world of Weird WWII this thing can have all sorts of uses other then mine clearing so just use your twisted brain and go to town. 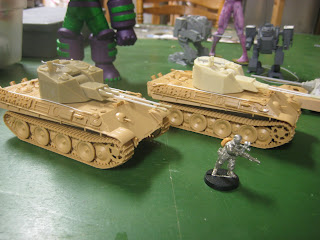 Here we have two Flakpanzer V "Coelian" AA tanks.  These are 1/48 kits from Tamiya and Verlinden.  These tanks are in essence a Panther with a new turret mounting twin 37mm autocannons for use against Allied figter-bombers.  These are popular paper panzers and make a great addition to any WWWII force. With the excellent armor of a Panther and the twin 37mm making a lethal threat to most on the battlefield or those above it. 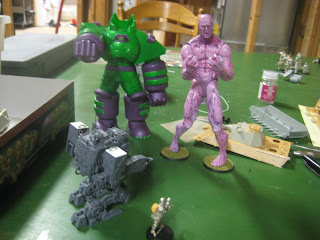 The giant thing on the right is really some kind of comic book action figure that I am going to use as some sort of rampaging escaped experiment.  This thing looks cool and though it would make a great addition to the table!  The big figure on the left is another comic book action figure that I am using as a giant robot known as the Sleeper.  Sleepers are robots designed by the Nazis during WWII that would be vengeance weapons that would activate sometime in the future to exact revenge for the fall of the Third Reich.  This one is being used to bolster the war effort on the field of my WWWII wargaming. There ya go, some more stuff on my work table that I hope gives you some ideas for your own gaming.

Email ThisBlogThis!Share to TwitterShare to FacebookShare to Pinterest
Labels: w.i.p.