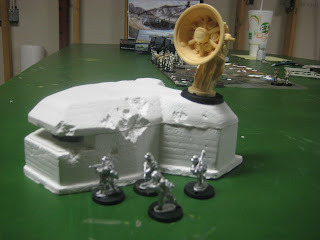 Above is one of the arctic outposts I got for my New Swabia missions.  Its a plaster 1/35 scale HMG bunker by Verlinden with the addition of a rotating resin wave-cannon by Armorcast.  Since we game in roughly 1/48 scale, the 1/35 scale bunker looks perfect to hold a small OP of 5 troops or so. 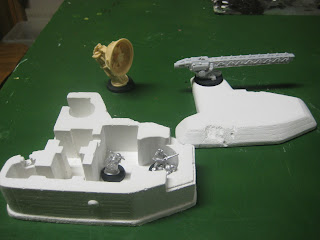 Here is a pic of it with the top off.  I'll probably do a simple interior just for ascetics but as you can see the 25mm round bases fit well in it.  The weapon on the mount is a resin rail-gun also from Armorcast. 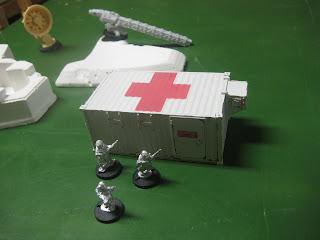 Here we got a heliborne arctic MASH structure.  It was some kind of terrain piece from the AT-43 CMG but it looks perfect for a MASH piece.  I envision them being dropped just behind the line so that those GIs can get patched up and also warm up because I here the arctic is cold this time of year. 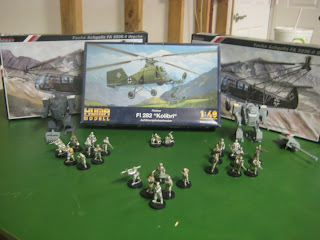 Here is my heliborne SS commando force.  I got some work to do on it but it all heli-mobile and ready to take the hurt to the Allies where ever they might be.  The 233s are from Special hobby and the 282 is from Huma.  The walkers are from the Dust CMG and the minis are from Victory Force.  Just think what Mussolini would have thought when he was rescued by this unit! 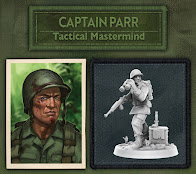 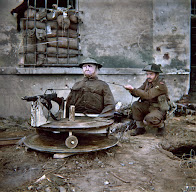 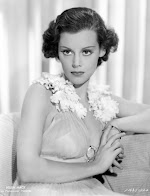 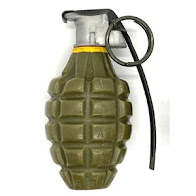 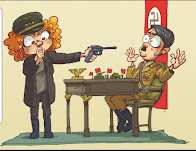