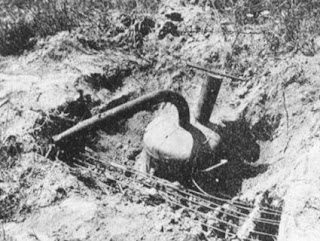 The Abwehrflammenwerfer 42 was a defensive static flamethrower used to protect vital points within a defensive line.  The weapons were often set to cover possible enemy avenues of approach or to protect other defensive positions within in the line.  The weapon was partially buried with only the nozzle and fuse exposed.  Once the fuse was tripped, the weapon would fire a 1.5 second gout of flame and then become inert. The weapon could be remote activated or triggered via tripwire or other such means.  These weapons were also often placed within minefields to add another layer of defense against enemy combat engineers or detonator vehicles.  Germany would produce over 50K copies of this Russian design.  Now this is a piece of kit that I know most have NEVER played with or against.  It is so obscure that most don't know about it so what better to have your pals trying to breach that minefield with their engineers and then all of a sudden they are engulfed in multiple flamethrowers.  HAHA!  So next time you play the Germans, don't forget the Abwehrflammenwerfer 42.