My Stuff: The Red Skull 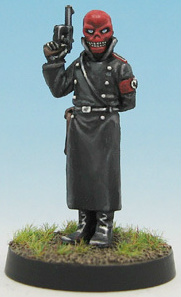 Here is arguably the most vile and power-hungry man on the planet, the notorious Red Skull.  Although a stalwart Nazi, the Skull's vision of the world is one of it under his own boot and he will do anything to achieve that goal.  He's hatred for Captain America is well founded as it is Cap who keeps this monster at bay thwarting his madness and preventing the Skull from fulfilling his hopes of world domination.  The above mini is from my former company, What The?! Miniatures.  It is sculpted by Aaron Brown of Black Crab Studios and was painted by Alden Miranda under commission.  This mini is a must for any WWWII gamer and it could easily be used in any superhero game too so swing over to What The?! and have Mark hook ya up with a truly evil madman.

Email ThisBlogThis!Share to TwitterShare to FacebookShare to Pinterest
Labels: Battleground Weird WWII, What The?! Miniatures